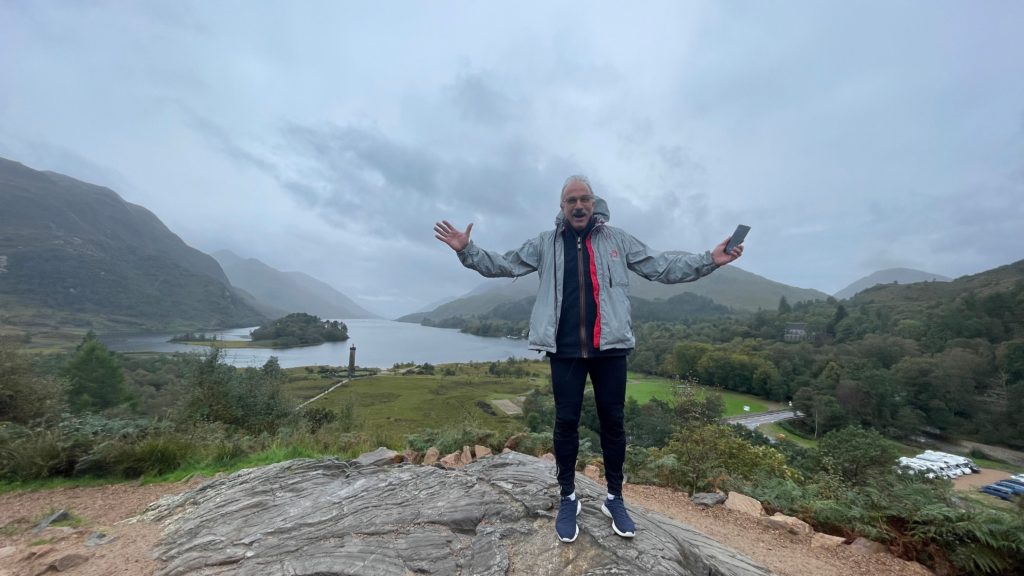 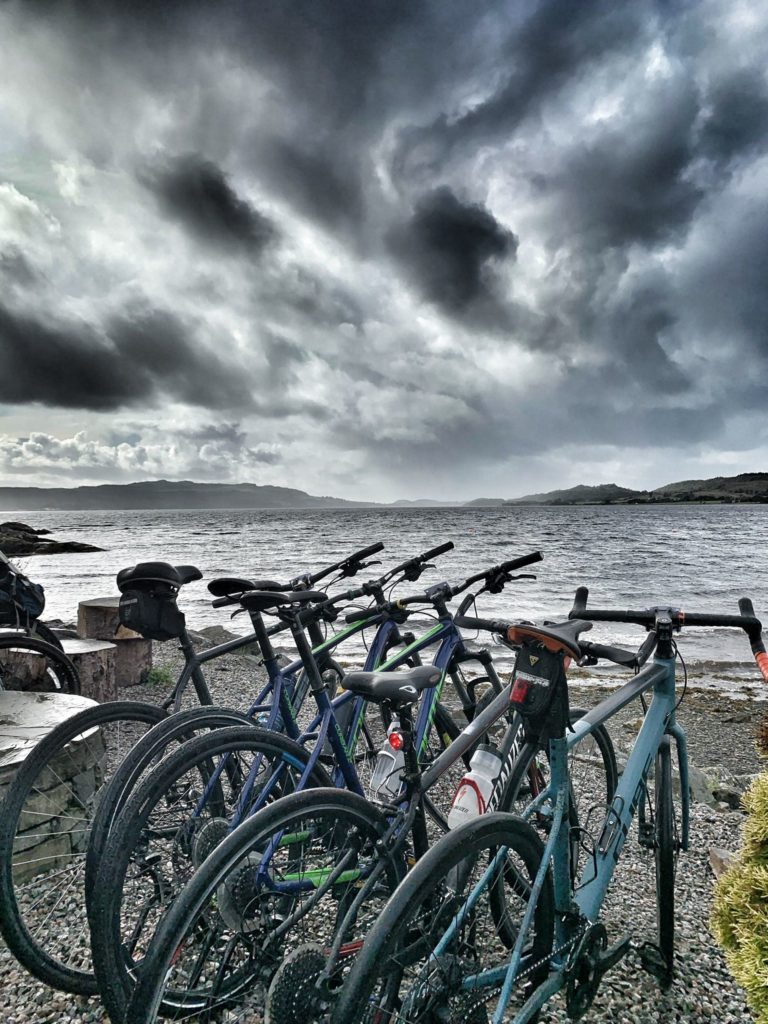 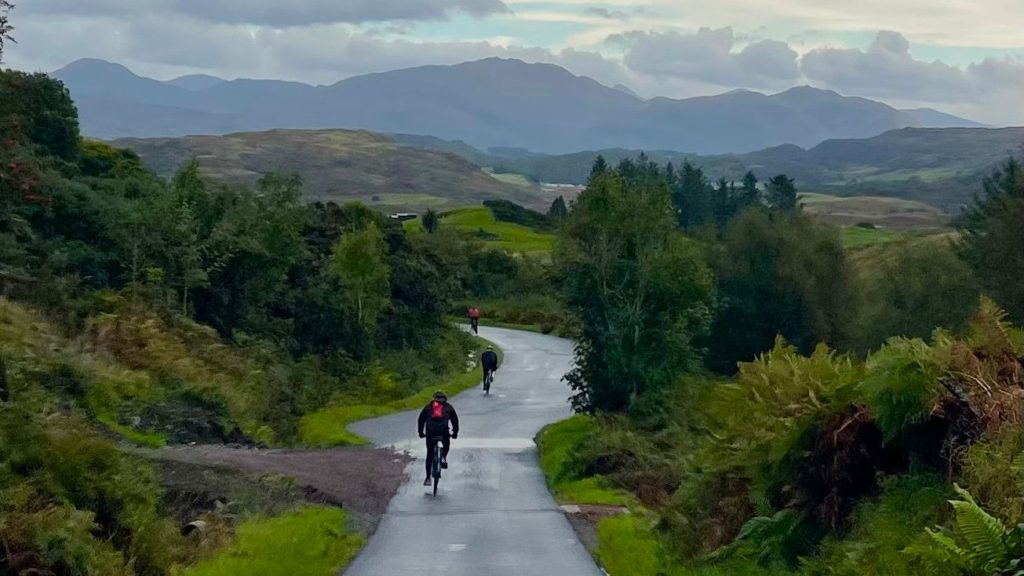 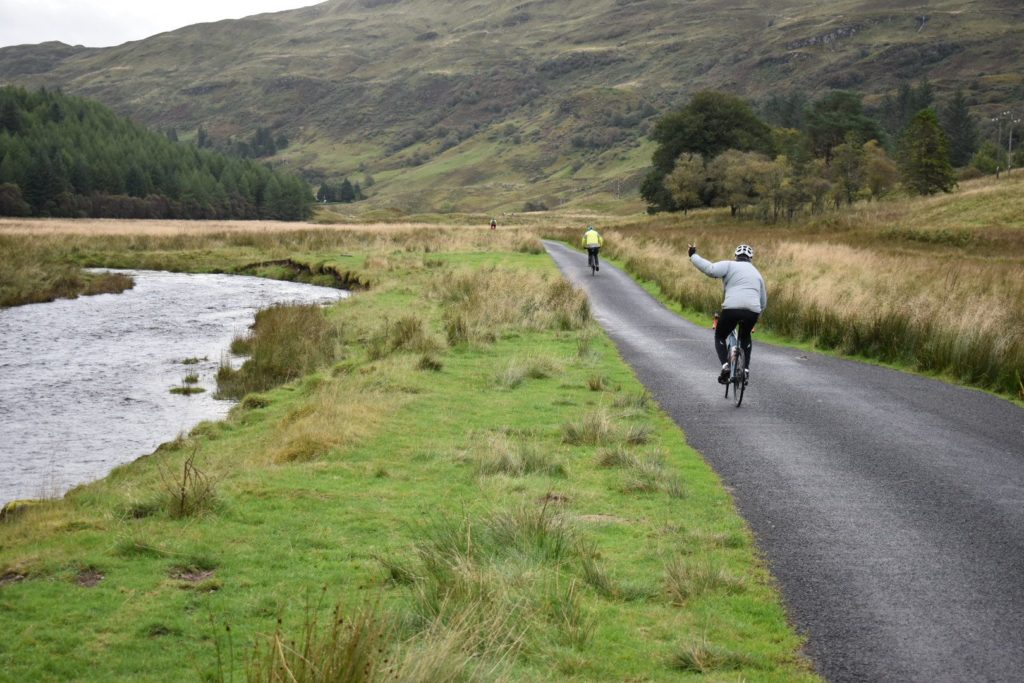 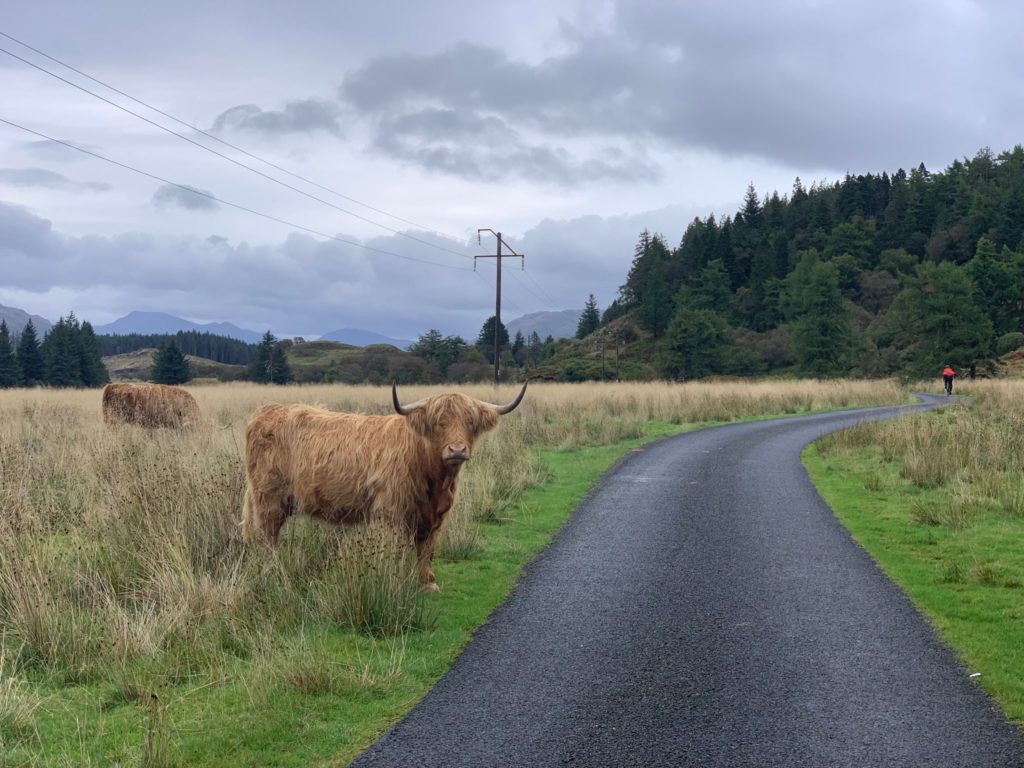 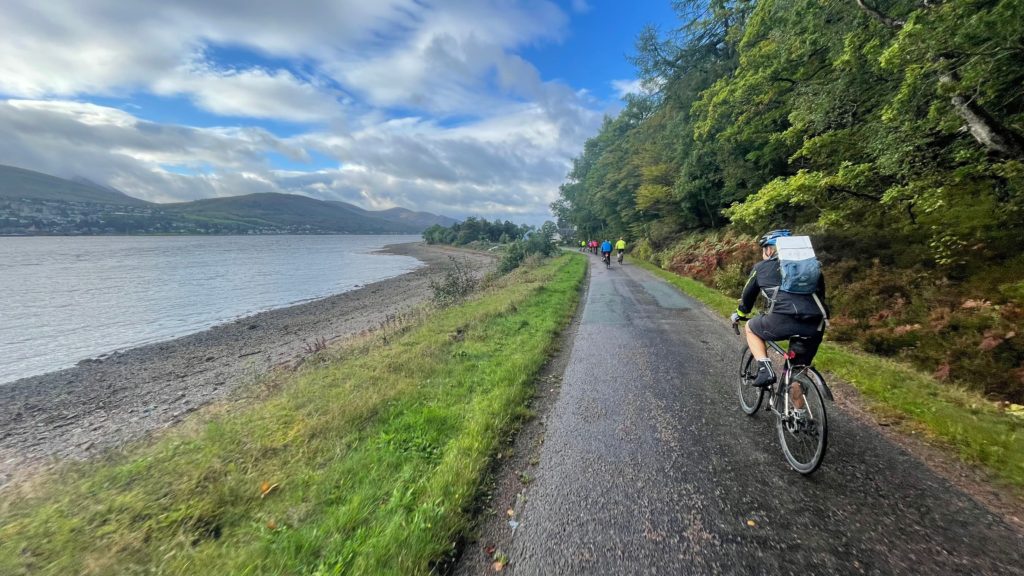 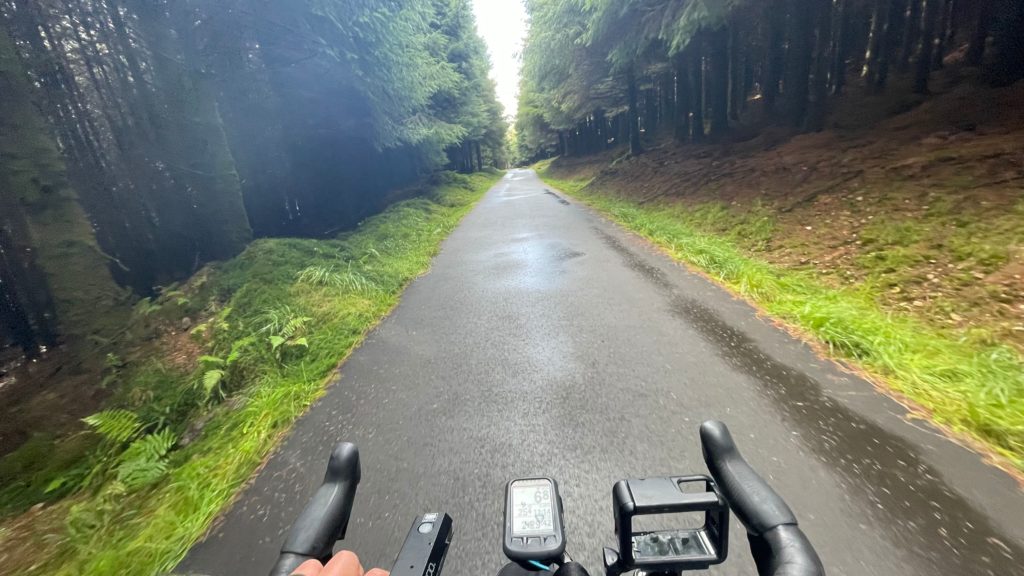 Heathrow T5 0800 and Mikey slews the Golf into the carpark and we leg it to wedge ourselves in at the back of the cabin and fly to Glasgow and coach all the way North to Ben Nevis, or rather the spectacularly grotty Ben Nevis Inn, before sorting the bikes out and heading to the bar for briefings and carbo loading.  Alex brought the music and a bit of metal brought some life to the joint. But most went early to bed to listen to their room-mate gently deflating through the night.

Morning 1 drizzled nastily as we filtered out North along the banks of Loch Eil and 25ks of being passed by weirdly aggressive drivers, hooting and flipping the bird, for no reason we could think of. It wasn’t like we were flying the cross of St George or anything. But all calmed down when we rolled into the Glenfinnian car park for a look at the viaduct made famous by the Hogwarts Express and then back at Bonnie Prince Charlie atop his pillar and as the drizzle got more serious we entered a raffle for our lunch that eventually saw all win a prize, although that’s quite a bold description of the vegan chicken burger Rod had to plough through.  And then it was back down the way we had come for a bit before a right took us around the top of the loch and down the single lane farm road down the other side, rolling through truly stunning scenery, marred only by the waste transfer truck attempting murder by trailer axle as he booted us all off his road one by one. Malcolm was our only casualty mind, a cattle grid shaking his water bottle loose and into his spokes and then clocking him in just the spot as he tumbled off the verge. Soft landing for him and his bottle. But no matter the Mad max style moments of terror, the road was a beauty with the loch on one side and the hills on the other and though Ben Nevis was forever hidden by cloud we did get some sunshine on the way, though not for long as the just after the very prettiest bit the promised front arrived at full tilt, headwind and all. It was a great last hour or so getting soaked inside and out, until we arrived at the tiny old ferry that was to take us back across the loch to Fort William in 3 loads, those sneaking out of the cold and wet and into the diesel filled cabin for the 1st ride getting a half hour start at the weirdly top-notch sauna pool and spa, though what a hotel in this neck of the woods is doing without a drying room I’ve no idea. We piled the sodden heaps onto the radiator and hoped for dryness by morning. It was only 50k’s in a day but cycling in cold hard rain is not what Truants are for, we do hot countries with spicy food, not sodden ones with haggis and chips.  Pretty though.

That evening we got into the swing of it a bit though all with an eye on the 85ks the next day.  Which saw weak sunshine turn us out in two groups to cycle into town and catch a proper Orange Boat ferry back across the loch where we turned left to Oban and cycled on the purpose built path all the 85k way more or less.  Some said the hardest of all Truant days, given the many hills and slippery leaf-strewn surface, but the weather was kind and the temps cool and the scenery simply spectacular. It is a superb track any half-way cyclist should do. It ended in a serious climb that saw many walking the last yards, but most getting there just, and Dave Whitestone strutting his stuff by going airborne as he summitted the final crest with the bravado flourish of a Yank who cycles 100’s of miles a week in Washington DC just for fun. Dave doesn’t normally show off though. Like Mikey Hole he mostly stays at the back with Mark with the bad knees and the other more physically challenged of us as we get strung out across the miles.  In the end it’s the camaraderie (and Ibuprofen) that get quite a few of us through distances we really should have practiced for.  But never got to it.

After that mighty climb (and not before one of us had sneakily nicked the estate agent’s sign that said ‘Galbraith. For Sale.’) the long slow descent into Oban was a delight, which is more than can be said for the hotel. But hey, we dropped our bags and headed out for a beer and then fish and chip dinner and the listing of the Heroes and Wallys (shall we say) of the day, let by the sale of our Galbraith, for being 2nd best to the flying Dave.

Next day, after a(nother) shite breakfast in our shite hotel we cycled back up that long gradient to Galbraith’s hill and headed out across the soddenly beautiful farmland on another one lane farm road, but beautifully surfaced for the most part and running through glens and long torrents and up the hills and down for a seriously knee-stressing and stretching 26ks, which turned into 29 as our roadside café stop had burned down between our reconnaissance and riding. So we pedalled on along the main road and a last huge hill before we found the gazebos and sweets and tea and coffee in a pre-school yard, just as the kids and Mums were heading out. What they made of our very own Methuselah, Simeon T pedalling by in his ancient golf waterproofs and straggling white beard I dread to think.  Mums, you couldn’t meet a nicer or more gentle man, I promise.  Or group of men and women for that matter, for we Truants may have looked drenched and dire, but we are lovely really.

And then it was a blessed bus ride as the rain teamed down and we crossed the back bone of Scotland, covering in a couple of hours what would have taken us a week to cycle up and down, before being disembarked on a marginally less precipitous section to pedal away our final 25k’s or so to lunch at the top of a loch and then on to the finish at, thanks be, the brand newly opened Cameron Lodge Hotel on the banks of Loch Lomond. Wow! That’s why we saved up on the previous 3 nights.

We were finished and exhausted and there is only one cure for that. So the beer flowed and then the showers and then the wine as we gathered in tartan to face the judges and pay our fines for the infinite misdemeanours possible in a rules-obsessed country. Rules and Truants are never easy bed-fellows.  We celebrated surviving our coldest and wettest and hilliest ride ever, but maybe the most beautiful too, and that’s saying something after Vietnam, Kerala, Cambodia, Morocco, Mexico, Cuba, all the way back 11 years, to the start of our 2 or 3,000 kilometres and £4+million raised, on the Nile.

Argentina is inked in for February 2023 and will be another awesome chance to do good.  Join us. Or sponsor us again.  Please.