Every society need rules so as to best ensure the right behaviours amongst its members.  In our case that’s making them part with money regularly so that our 3 great causes keep benefiting.  Truants have no difficulty complying with the many social requirements of membership, but it is to be hoped many will slip up on the rules below and thus have to cough up and look big a lot.

These rules have been drafted by Tom Baigrie, the current “PREFECT FINEMASTER”, but the ultimate arbiter of all matters relating to fines shall be Rod Smallwood, “THE ROD”

In order of niggliness, the rules are:

1.BADGES SHALL BE WORN.

BADGES are awarded by THE ROD to recognise the achievement of each ride and shall be received with pride by all those who earn them.  Those who have 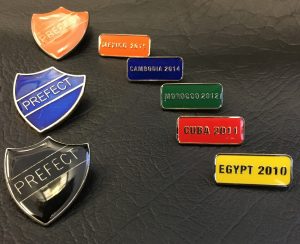 completed  three rides or more are to be even prouder and more privileged for they are entitled to wear the wonderfully oxymoronic Truant PREFECT badge.

All earned BADGES must be worn at all formal events, specifically but not only, the first and last days of the Rides, Ride briefings, Annual Awards Dinners, Truants Golf days and any special Truant event organised by THE ROD. All badges must be clearly on display otherwise there shall be a £5 extra fine and badges redisplayed immediately.

In addition, at any time a Truant is in the company of at least seven others then BADGES must be worn, though PREFECTS are allowed to wear only the PREFECT badge. Whether or not the Truant was expecting 7 others to be in attendance is irrelevant. However members are advised to be prepared that a quorum of 8 is likely at any event at the Royal Mid Surrey Golf Club,  Nordoff Boxing or Rugby Dinners, the Classic Rock Awards, the Cyclothon, any International Rugby Match, Lords Tests or any event organised by Truants for Truants.

The FIXED PENALTY is £10 for the lack of any number of BADGES except PREFECTS who are supposed to  set an example and are thus fined £20. THE ROD will be the COLECTOR OF FINES, but in his absence any PREFECT may be nominated by his peers to collect the fines in cash and spend them all on beer or similar, before paying the same amount gathered into the Mr FINES RACE NATION ACCOUNT the next day noting the occasion and making any properly relevant comments.

In the case of lost badges these can be replaced by HER RODNESS Helen Curl at a cost of £5 per country badge but £10 for PREFECTS BADGES. The proceeds to go to the Charities via this web page, the miscreant noting his name with a lame excuse of how it came to be lost. If a badge is replaced at an event the cost of the badge is on top of the fine

This wonderful confusion adds up to one thing and one thing only…..more fines for the charities!!

When any Truant makes a proposal to another of a social kind, and seeks the commitment of the other, the commitment shall be deemed irrevocably given when 2 or more Truants clink glasses (“THE CLINK”)   Thereafter all parties must carry out the proposal agreed at THE CLINK without fail.  Amnesia, drink, prior engagements or partners views are of no relevance once THE CLINK has taken place.  For the avoidance of doubt, 2 truant witnesses to THE CLINK are required.  Failure to honour agreements cemented by THE CLINK shall be punishable by fines as set in hindsight by an ad hoc committee of any 3 Prefects.  Such fines can be expected to be of 3 digits and no decimals and be relative to the theoretical cost of the commitment cemented by THE CLINK so as to incentivise the recidivist Truant to just turn up!

These can only be levied during the period of the actual bike rides or at a Truants Golf Day, by the PREFECT FINEMASTER elected on the occasion to do so, or by THE JUDGE, Robin “m’Lud” Moore (or in time his heirs and successors), but not both simultaneously. EVENT FINES AND LEVIES will be recorded  and shall be priced moderately, but enthusiastically, and with a proper recorded description of the transgression and the logic by the TRUANT REGISTRAR Mr Alan Bennie as to quantum where that shall exceed £25. The maximum fine or total of various fines inflicted over those events shall be hereon £100, that being for gross offences or a combination of misdemeanours. EVENT FINES AND LEVIES can only be appealed and debated at the time of imposing and failure to pay within 2 weeks will leave the truant liable to punishment at the discretion of THE ROD.

During Rides a quorum of PREFECTS shall, towards the end of each day, elect the WOD.  This person shall not necessarily be our leading onanist, but rather the Truant who has done the most amusingly stupid thing on the day in question.  This award is our equivalent of the YELLOW JERSEY awarded at that other great cycling event, the Tour de France, and the recipient will thus wear it with PRIDE for the next 24 hours, or until such earlier time as s/he has completed a day’s cycling in it and rendered it too wet to wear, or s/he departs for an airport or similar place of reduced humour.

The second highest Truant award is for the Hero of the day. Wearing a HOD green T-shirt when not the current holder of the title is a FINEABLE OFFENCE.