Dawn of ride day 2, the Western Ghats, Kerala. The guides pass down the line of tents waking us up as we grumble and stumble.  We need to break the back of it before the heat peaks. We didn’t. We load water and salts into us and our bags and bottles, we scoff toast or sloppy curry and do our tai-chi stretches in the clearing in the jungle next to the big brown river. Yesterday was fun, far enough to hurt plenty, but not too far. Today is too far and the topo-map looks a bit like a heart attack with ups and downs turning into jags running out to a long flat line.  Except that, when we rode it, we found that the jagged bit of the heart attack lasted longer than the flat-line. No one died. I thought I might.

We ground up the long, long hill in the noon-day sun they said we’d avoid, getting to 1:1 on the gears taking the uphill bend that promised an end to it, only to find it was the same again. Hearts pounding, poorly trained knees screaming, temperatures off the scale, sweat pouring and muscles promising cramp forever. Rehydrate! Not possible, going too slow. Not balancing, teetering. Some of us were on that hill for damned nearly an hour. But then a briefly less steep bit and the joys of 1:4 and measurable progress, slurping and pep-talking, not using any words I could write here apart from the ‘you’ in the middle of the others. And then back up to 1:1 and the new ridge-line target and the so, so slow grind continues. And at the very top a glance all the way back and is that Bazza just starting that roasting tarmac hill, 30 minutes or more behind me? Poor sod.

We rode 96 kilometres that day and ascended 1600 metres overall, for there were a few other hills they didn’t really explain about in the briefing, but never mind that, it’s done, the beer in the pool is cool and we’re talking about the stunning opening 20k through the rubber plantations and the gentle inclines along the recently repaired with rough cemented-gravel roads through the wet jungle, with the little hamlets full of smiling Keralans and the occasional Exocet of a fully laden bus on the wrong side of the road and the endless friendly beeps as every scooter warns you it’ up your arse, just as the tipper truck booms out its warning that it’s in your face.

And between the run-down hamlets the houses of all sorts just tucked into the jungle, including quite a few bigger and flasher than anything you’d see at Wentworth.  Well almost – and even more incongruous. It’s Dubai money you see. Kerala works because millions of its (very slim and beautiful) people are away building the sheiks’ dream in the desert and sending their earnings home, so that the poor don’t need to beg as they do in the rest of India, they just smile and practice their schoolboy English on us and stare at our weightier men as a circus crowd might stare at the painted lady. We love the irony of the world’s only democratically elected communist provincial government living off the sheiks; if only all the world could redistribute a bit of its wealth so efficiently. Mind you we are doing our bit.  You too dear sponsor, thank you. Rest assured we earned your money for the children, we earned it in sweat and bloody-minded determination to overcome our manifest lack of cycling talent or practice.

We landed at 0400 at Cochin and spent the last hours of night chatting on the roof of the spectacularly out-dated Lotus 8 motel, going straight to breakfast and then bed and then lunch and then bike-fitting and a warm up ride to the golf-course at the end of the runway, as flat and noisy as dear Mid-Surrey, but no golf for us – we’re straight back to prep for the first day in the saddle while eating scary looking food and using a bit of beer too – for the carbs you understand – and avoiding ice and salads and so keeping our innards in order. We rose at 0600 and were on the road at 0700, cycling down the little track out of the airport suburb and out into real India weaving our way through the manic traffic to a roadside temple, where the jingle jangle music blared and the holy man in his dhoti skirt and saffron powdered hairy chest blessed all 44 of us with a bindi and a garland of flowers before we sending us off into the main-road maelstrom. We turned off as soon as, down a canal-side track that gave us the flat and straight our ageing legs love, though with a road surface that had us all weaving and juddering and shouting warnings of potholes to those behind. When you took your eye off the road just ahead though, the scenery was stunning, rice paddies and jungle giving way to each other in turn. We were approaching the hills they call the Western Ghats.

The day got hotter, the humidity rose with it, we sweated buckets, wished we’d done more training, helped those who fell or broke down and covered our first day 60k ride in decent order, in 10k stretches, broken by brief rehydration stops and to let our Imperial Guard catch up with our cavalry.  We got to the eco-camp in early afternoon to rest and catch up and sleep off the jet-lag and prep for the day from hell that was to come.

But we did that bastard hill, and all the others and we beat that heat and found an hour to visit a wee pre-primary school and spread the Truant joy and stationary before we climbed back on the now hated saddles and ground our butts through the rest of those 1600 metres of climb and then revelled in the all too brief free-wheel down into the valleys that followed, before eventually, those 96k’s later, we reached our hotel with a pool and delighted in having finished the hardest of all the Truants cycling days ever. The very hardest. And so to bed, with just one more day to go before the big relax.

We rise at our normal way-too-early hour, but this time catch a boat to our start line, where the bikes lie waiting for us in the heat, for we are in the Keralan lagoons now and some places bikes can’t go. But that pleasure of a local’s ancient engine doing the work soon passes and it’s back to our own very personal ancient engines, sore and cranky and grinding our gears through the k’s and the steadily increasing chaos of subsistence farmland turning into city suburbs, with sometimes 5 vehicles to a 2 way road – in transection it might be bike: moped: overtaking tuk-tuk: truck coming the other way: just passing the packed bus. Madness, but with not one drop of road rage – these folk are amazing and admirable it seemed to us. If the pot-holes don’t get you the busses will, a local said.  She was wrong but only by inches.

And then on to our grandstand finish and a huge pool by the beach and a party like no other. Villa 20 will long remain in our memories as one of the great finishing celebrations.  We did the miles, we bore the butt pain and the chafe, we raised well on the way to £600k and we all survived. Just. Job done, where’s next in 2019? 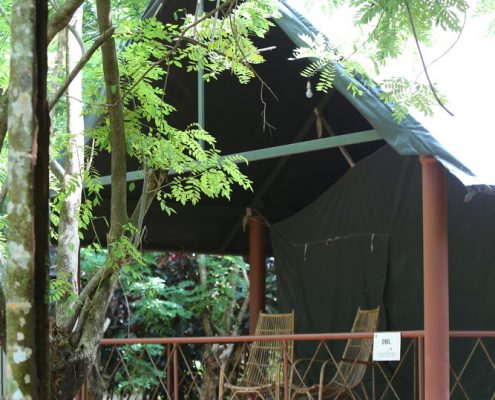 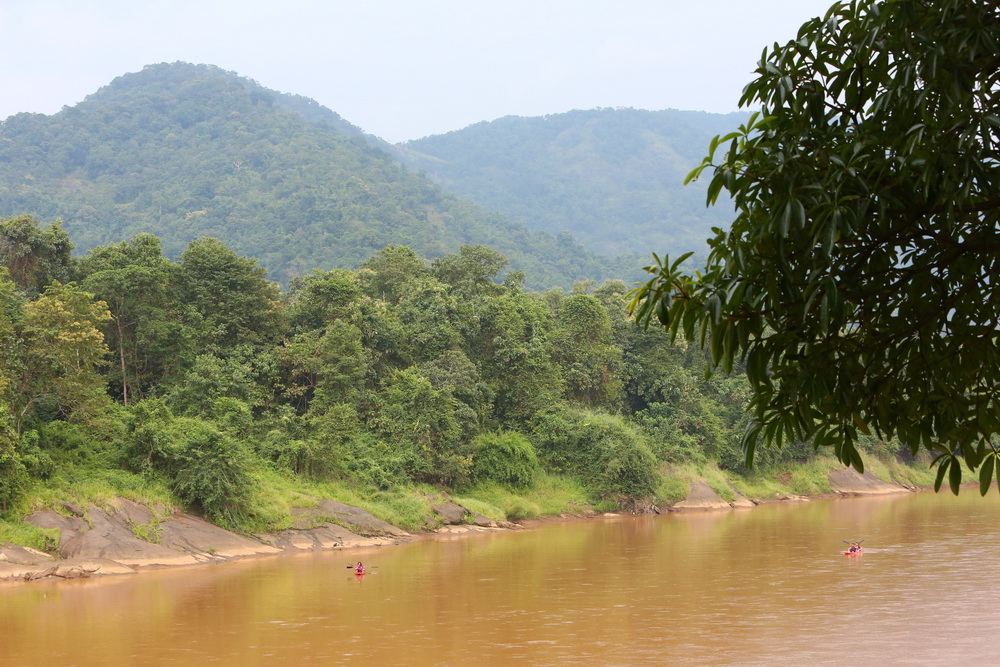 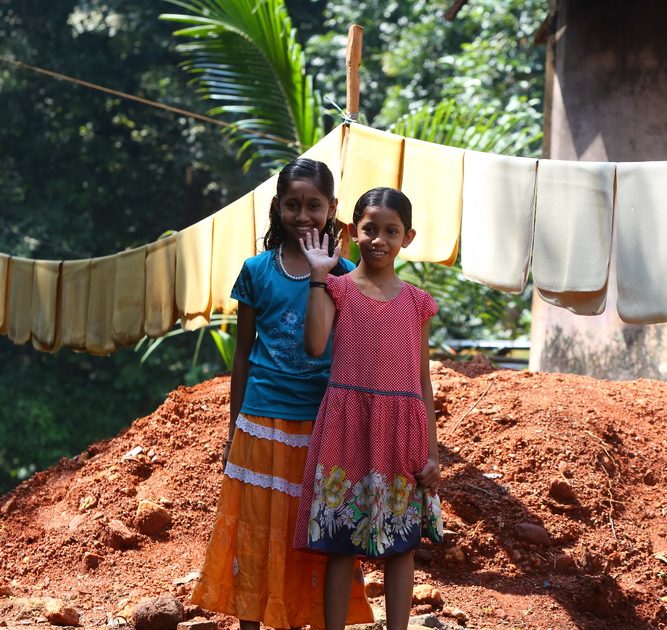 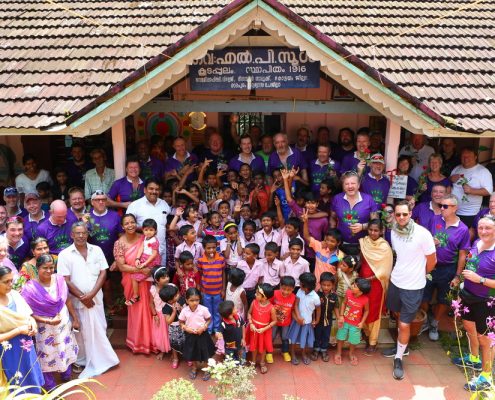 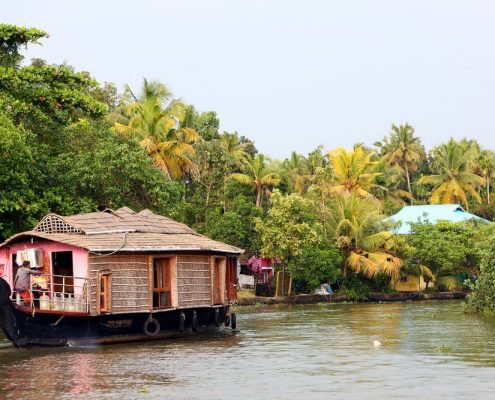 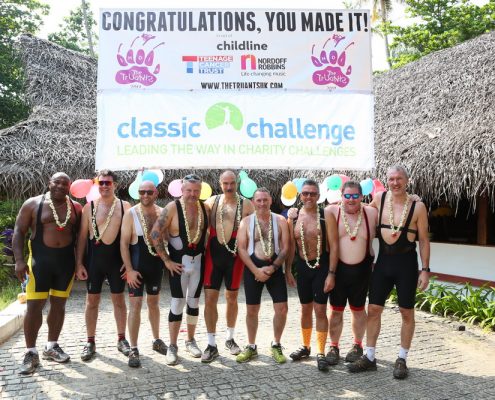